In the aftermath of the assassination of a city leader, a brother and sister who are secretly in service to the throne must discover who was behind the plot — and they must do so before an approaching army destroys the city itself. 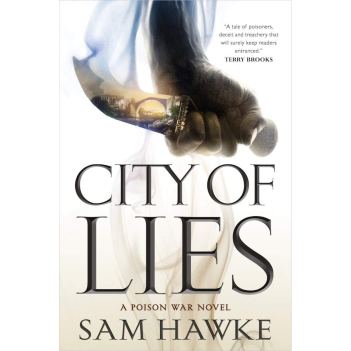 CITY OF LIES is an intriguing fantasy mystery that is at its best when it focuses on its strengths: an impeccable flair for foreshadowing, and the struggles of its two nuanced leads, Jovan and Kalina.

CITY OF LIES doesn’t pull any punches in its early pages, inviting you to fly through chapter after chapter in search of the disaster you know is coming. Ms. Hawke excels at leaving her readers uneasy, planting just enough so that you know that something is off, even if you aren’t sure what.  Even after the main crisis unfolds, there are plenty of other twists and turns to pull you along, wondering what form the new disaster will take. This is aided by the somewhat ingenious setting of the story.  With the capital city under siege, the vast majority of the action takes place in this pressure cooker, its characters trapped with no way out, forced to confront a growing number of problems as enemies inside and out grow ever bolder with their plots.

This ordeal is viewed from the alternating perspectives of brother and sister Jovan and Kalina, compelling heroes with intriguing flaws.  Each has a crippling weakness that threatens to thwart their attempts to save the city, and serves to make them even more engaging as characters.  Jovan has a photographic memory, which has aided in his training as the Chancellor’s proofer (poison tester). The price of his genius, however, is an extreme form of OCD which drives him to count things in even sets when he is stressed, forever in danger of being trapped in a mental loop that leaves him unable to interact with the rest of the world, even if there is an immediate crisis at hand.  Kalina, meanwhile, has been cursed with an infirm body, making most physical activity exhausting for her. Unable to take the rigors of training to be a proofer, Kalina learned instead the art of espionage, using her unassuming appearance and weakened condition to hide in plain sight, observing those who overlook her. Both Kalina and Jovan struggle internally with the frustrations their handicaps present, even as they race against the clock to discover who is manipulating and betraying the city before it falls to the rebel army outside.

Unfortunately, it is in this race against the clock that the story begins to flag a bit.  Kalina and Jovan investigate several different avenues in their quest to unravel the plot, and while individually the threads are interesting, I found myself increasingly frustrated as each one turned into a dead end (quite often literally) as their opponent was always a step ahead, destroying the lead.  The continuous tantalizing lure of finally learning new information, only to be disappointed, became repetitive after a while.

Thankfully, the third act picks up the pace and rushes to the finish line, overall making this a compelling read that I am grateful I’ve had the chance to read. I look forward to the next book in the series, which the author has promised will take place several months after the events of book one.  Even though the tale of this first book is contained inside one city, Ms. Hawke did an excellent job of teasing out the world beyond the walls, and I am hopeful our heroes will travel to new places as they deal with the problems that led to the war in the first place.

5 thoughts on “Review: CITY OF LIES by Sam Hawke”