I missed this tag the first time it went around at That Artsy Reader Girl, and given one of my October Goals is to finish a series, I thought I’d highlight a few that I really need to get back to.

5 Series I Need To Finish

The Thousandth Floor by Katharine McGee
For someone who reads a lot of YA, I am not a huge fan of everyday teenage soap dramas. You know, the ones where there’s lots of texting and parties and gossip and backstabbing. The first book of THE THOUSANDTH FLOOR has all of this, and yet I couldn’t put it down. Sure, it’s set 100 years in the future entirely inside a one thousand story skyscraper, but I was still surprised how much I enjoyed this read. Come for the teenage drama, stay for the murder-mystery.

THE CRAFT SEQUENCE by Max Gladstone
One of my favorite things to see in any kind of media is when the extraordinary is treated as mundane. THE CRAFT SEQUENCE is tailor made to fill that need. This is a world with magical lawyers and permit offices and all kinds of bureaucracy. I finally read book one earlier this year, but I want to continue the series before I forget everything that happened. 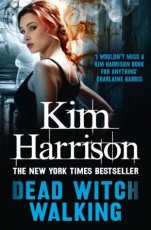 THE HOLLOWS by Kim Harrison
An urban fantasy set in an alt-timeline where all sorts of magical beings exist in the open and co-exist with humans. Rachel Morgan is a witch and a bounty hunter, tracking down bad guys while also dealing with her vampire roommate, accidental demon summonings, and other such magical problems. I’m five books into the thirteen book series. These novels are a good break from hefty space operas and high fantasies, and I enjoy rotating them into my queue.

THE PARADOX TRILOGY by Rachel Bach
A lesser known title, but a series I’ve really been enjoying, albeit WAY too slowly. Devi Morris is a mercenary for higher who comes with her own augmented battle armor. When she hires on as a guard for the spaceship The Glorious Fool, Devi is hoping that her stint will give her reputation the boost it needs to finally join an elite team of mercenaries. What she gets instead is monsters, conspiracies, and way too many people who want to kill the charges under her care. I’ve read the first two books in this trilogy and need to make time for book three.

THE BROKEN EARTH by N.K. Jemisin
I worry a lot when I hear a book getting universal praise that it will be over-hyped and I will be let down. THE FIFTH SEASON, book one in the trilogy, absolutely earned every one of its accolades. The shifting narrative voices, from first to third to even second person, culminate into a beautiful finale. THE OBELISK GATE is extremely high on my “To Acquire” list and hopefully I will get to it before the year is out.

THE STORMLIGHT ARCHIVE by Brandon Sanderson
I have absolutely loved Sanderson’s two other series, MISTBORN and THE RECKONERS. I have little doubt that I will love his high fantasy series THE STORMLIGHT ARCHIVE, and I’ve had book one on my Kindle for years. I’ll be honest, I’ve put this off because it’s SO. LONG. I need to find a nice long weekend when I can dive in and make some significant process before I start feeling guilty about the three other books I could finish in that time.

OLYMPUS BOUND by Jordanna Max Brodsky
I bought book one of this series at Comic Con last year and meant to read it immediately, which of course means I didn’t. I love mythology and plays on mythology, so I’m very intrigued to check out this trilogy, especially with Selene, goddess of the hunt and the moon as the lead character.

DOMINION OF THE FALLEN by Aliette de Bodard
Another book that I keep staring at on my shelf. I recently had the chance to read de Bodard’s novella IN THE VANISHERS’ PALACE, and was really taken in by the strength of the writing. I’m trying to bump this up in my queue (are you sensing a pattern yet?) and hope to start the series sooner or later.

THE YOUNG ELITES by Marie Lu
This is my YA shame. I’ve read the LEGEND series and WARCROSS (and hopefully soon WILDCARD), but THE YOUNG ELITES has been a long-standing “I should start that series…” entry on my TBR list. With THE RED QUEEN series ending, I’m going to need a substitute YA-with-powers fix, and this seems like an excellent choice.

THE EMPEROR’S BLADES by Brian Staveley
This series has been highly recommended to me from multiple sources, and I event went out of my way to request it as a gift last birthday. Yet here the series sits, unstarted. The first book promises warring siblings, conspiracies, and assassinations. You know, just another day at the beach for heirs to a turbulent empire.

How about you? Any series you’ve left unfinished where you do really mean to get around to that last book?