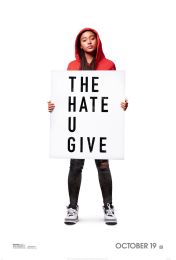 THE HATE U GIVE has a high bar set by its source material, the acclaimed YA novel by Angie Thomas.  It’s a bar this film equals, if not surpasses, a truly moving piece of work about the complicated life of being black in America, and importance of speaking out.

Directed by George Tillman Jr., THE HATE U GIVE is about Starr Carter, a black teenage girl who is trying to balance her two “selves” – the person she is at home in her black neighborhood, and the polite, unobtrusive persona she puts on when she attends her nearly all-white private school.   Her balancing act is thrown completely off when she witnesses the shooting of her black friend Khalil by a white police officer.  While coping with her own grief, Starr has to decide how public she wants to be in role of “the witness,” the one anonymous person who saw what happen. Faced with an activist lawyer who wants her to go public on one side, and a local drug king pin who wants her to stay quiet on the other, Starr has to forge her own path and figure out how to best honor her dead friend’s memory.

From the moment this film starts, it sets the tone for the strained relationship between the black community and the police.  Starr, not even ten, gets a stern lecture at the dinner table from her father about how to conduct herself if she is ever pulled over by the cops.  Keep your hands on the dashboard. Answer their questions. Don’t talk back. Everything you can do to seem non-violent.  Years later, when Khalil and Starr are pulled over, Khalil refuses to be silent, refuses to treat the matter seriously, eventually reaches for a hairbrush which is mistaken for a weapon and is shot.

This movie would not have worked without the incredible performance by its cast, especially lead Amandla Stenberg as Starr.  Stenberg is moving in their portrayal, working through the raw emotions of grief, fear, confusion, and eventual rage as they deal with the fallout of the shooting.  Stenberg largely keeps their performance at a quiet simmer, until the explosive moment at the end when they finally speak out at the protest in front of city hall. It is absolutely powerful and I commend them for their performance.  Russell Hornsby also deserves accolades for his role as Starr’s father, Maverick Carter, a former drug dealer gone straight who believes in the importance of speaking out and will protect and support his girl by any means necessary.

THE HATE U GIVE manages to balance several facets of Starr’s life, weaving a compelling family drama into this crisis.  Audrey Well’s adaptation of the book keeps the characters front and center, giving moments plenty of breathing room and creating a real believable dynamic within Starr’s family.  I was amazed at how well the script threaded so many threads from the book into this two hour film, from Starr’s increasingly strained relationship with her white best friend who blames Khalil for his own death, to her father’s fraught tension with his former friend and current drug lord who is now threatened by Starr’s testimony.  It’s a complicated story on a number of fronts, and both Wells and director Tillman spin all the plates effortlessly.

Happy June! Here's my physical TBR for the month, with an unintentional color scheme! In a fit of ambition, I'm also hoping to fit in MASTER ARTIFICER by Justin T. Call, SIX CRIMSON CRANES by Elizabeth Lim, and THE THIEF WHO WENT TO WAR by Michael McClung! Also, shout out to Orbit Books for showering me with most of the physical copies in the post!
So excited for my copy of CATALYST GATE to arrive! VELOCITY WEAPON by Megan E. O'Keefe was one of my favorite sci-fi books of the last few years. CATALYST GATE will finish the trilogy started when Sanda Greeves woke up alone on an enemy ship with only an AI for company - oh and missing a leg and 200 years in the future. This series is fantastic and it's all coming to an end June 2021!!
It's one of my favorite times of year - #wyrdandwonder! A celebration of all things fantasy! This is my physical (overly ambitious) TBR for the month. I've also got MASTER ARTIFICER and THE HOUSE OF ALWAYS on my Kindle. What are you excited to read this month?
Going into the weekend with dragon energy! I've got my hands on THE DRAGON OF JIN-SAYENG, the final book in K.S. Villoso's fantasy trilogy! I still need to read the second book, but I'm looking forward to completing the trilogy this year! This is the tale of a queen trying to navigate political upheaval and her own marriage, protecting her throne from threats within and without. The final book releases May 2021!
Received some lovely bookmail in the form of the final book in THE KEEPERS trilogy! This has been a dark tale of a city struggling to survive when both magic and magical creatures return to the world after centuries of being nothing more than myth. A blend of grimdark and hope, packed full of interesting creatures! VOIDBREAKER released earlier this year and I can't wait to finish the series!
It might be spring, but that doesn't mean you can't enjoy a cozy story set in the woods! FOR THE WOLF follows a second daughter who is sacrificed to the mysterious Wolf in the Woods by her people in the hopes it will restore their gods to them. But the daughter has a secret power which could change everything. I love a good fantasy romance, looking forward to reading! Releasing June 2021.