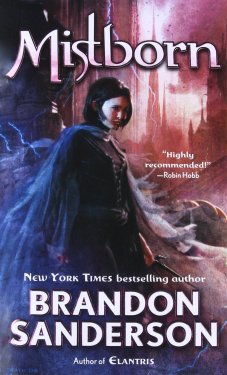 Welcome to another installment of Things I Love!  This week, we’re discussing a very specific facet of a series I adore – MISTBORN by Brandon Sanderson.

There are many things to love about MISTBORN, from the characters to the setting to the plot (who doesn’t love a good fantasy heist?), but what really made this book stand out to me was how Sanderson wrote his action sequences.

Sanderson’s action sequences work because they are absolutely kinetic in their descriptions.  You can see the fight play out blow by blow.  This is aided in part by the fact that Sanderson created a magic system that absolutely supports insane aerial combat.  The magic of MISTBORN, called allomancy,  allows certain people to take one of eight metals, ingest it, and use it to power certain abilities.  The vast majority of magic wielders are Mistings, with the ability to use one specific metal, and therefore one abilitiy.  A Mistborn, however, is a person who can use all eight metals, and therefore all eight abilities.  These include the ability to push and pull metallic objects, either to hurl them, or to propel yourself into the air. The result is that when two Mistborn go at it, people and objects are literally flying.

But you don’t even need two Mistborn for a tight, tense fight.  One of the most memorable passages from the book involved a Mistborn facing off against several Mistings who had been trained to to use their abilities in concert to nullify a Mistborn.  It was a sequence of strategy and thinking on the fly, as hero Vin had to figure out how to dismantle the force opposing her to effect her escape.  You can practically take the scene as written and film it, the action is crafted so vividly.

How about you?  Do you have an author whose action you love?