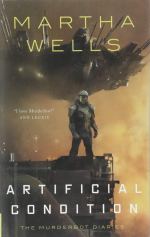 ARTIFICIAL CONDITION picks up a few days after the end of ALL SYSTEMS RED. Murderbot, as it refers to itself, is unsure if anyone is coming after it after it ran away from its human guardian. Either way, it wants to journey to the planet where the tragic incident happened that led Murderbot to choose its name. There, it hopes to find out what really happened to cause its glitch and the subsequent massacre.  The readers, in turn, will discover another fun adventure, although perhaps one less novel than the first time out with Murderbot.

The better parts of ARTIFICIAL CONDITION come from the new character of ART. When Murderbot hitches a ride aboard a transport to travel in search of answers, it finds itself in the company of a lonely, if arrogant, ship AI, bored since the current trip is cargo only and it has no humans to protect. Murderbot introduces ART to media, and the two bond over Murderbot’s favorite programs. ART also gives Murderbot some much needed outside perspective in needing to take ownership of your life and not just retreating into escapism when things get tough. This is a new adjustment for Murderbot, who has never had to really engage with life and take responsibility for its choices, always able to tune out the real world or mentally pass the blame to humans because of how they programmed it.

I found this story slightly less engaging than the previous book in part because some of the plot points felt like a retread.  During the quest to discover its past, Murderbot runs across some humans being threatened by yet another corporation and steps in to protect them. The difference here is that Murderbot now for the first time in its life has to act as an agent of free will, and not pretend to be a soulless automaton.  In fact, the choice to even intervene on behalf of  the humans is Murderbot’s choice entirely.  How Murderbot copes (or doesn’t) with that responsibility is part of what drives the story.

ARTIFICIAL CONDITION is not a story that is going to provide all the answers, but it does give Murderbot the time to process its newfound freedom and understand the full ramifications that freedom brings. For those who enjoyed ALL SYSTEMS RED, your favorite deadpan security bot is back for an engaging, if slightly repetitive ride.