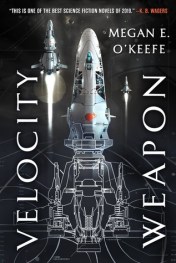 The internet was recently treated to a cover reveal and excerpt from Orbit Books for upcoming sci-fi adventure VELOCITY WEAPON by Megan E. O’Keefe.  This space opera tells the tale of two siblings, Sanda and Biran, the former a soldier and the latter a politician.  During a routine opp in an on-going intergalatic war, Sanda’s ship is heavily damaged; when she wakes up, she discovers 230 years have passed, that she’s on an enemy spaceship, and that everyone on both sides of the war is dead.  Somehow, from two different points in time, the two siblings must find a way to stop the war.  VELOCITY WEAPON will release June 11th, 2019.

I have to say, the excerpt for VELOCITY WEAPON has instantly got my attention.  We are introduced to the soldier sibling, Sanda, who has woken up in less than ideal circumstances: naked in a med pod, missing a leg and with no sign of human life around to assist her.  But although Sanda’s obviously processing the shock of one revelation after another (including being on an enemy ship), she never let’s herself panic.  She focuses on getting from one task to the next, dealing with each new wrinkle as it appears.  I’m definitely looking forward to seeing how she continues to adapt to her changing situation, and her interactions with ship AI Bero, who seems remarkably unperturbed at having an enemy combatant as his sole passenger.

I’m also very curious for the mystery set up in this excerpt.  How did Sanda come to awaken after 230 years?  What caused the destruction of all life in the galaxy?  And how does she possibly think she can fix it?  We also have yet to meet her brother Biran, a politician who wants to bring an end to the war.  How these two storylines connect will make or break the story, and I can’t wait to see how it works!

Did you read the excerpt?  What are your thoughts?