This week’s Things I Love is turning to video games, because I absolutely have to gush about the game I’m currently playing.  I went in with fairly low expectations and it is now consuming every spare moment I spend on games.  Today, I come to you to wax poetic about the delightful CHILD OF LIGHT.  This isn’t a full review, as I haven’t beaten the game, but I’ve played enough to whole-heartedly recommend it to others.

CHILD OF LIGHT is a combination 2D side-scroller with some light turn-based combat. This is a fairy tale, about a young princess named Aurora who falls into a mysterious slumber, only to wake in a fairy tale land ruled by an evil queen, one who has stolen the sun, the moon and the stars to plunge the land into darkness.  Only by restoring these objects can Aurora defeat the queen and return to her world.  This tale is told against a beautiful watercolor-esque backdrop, and occasional narration, as if we are being told a child’s bed time story.  It’s all gorgeous and cozy.  Even the dialogue takes place in rhyme, which admittedly can get a little grating, but it’s a minor quibble overall.

The thing that has me continually coming back is it hits the sweet spot of being simple, yet with just enough complexity to keep me engaged.  If you don’t like platformers, never fear, for within the first hour or two of the game, you unlock the power of flight, and your exploration becomes a literal breeze, with occasional dodging of obstacles like spears that pierce outward from the walls. There are treasure chests and hidden items scattered all over the map, encouraging you to explore every nook and cranny.  Almost every item you find is some kind of potion or upgrade, so it doesn’t feel like an achievement hunt.  There are no stores or currency, so the only way to find health potions or other elixirs is by seeking out these chests. 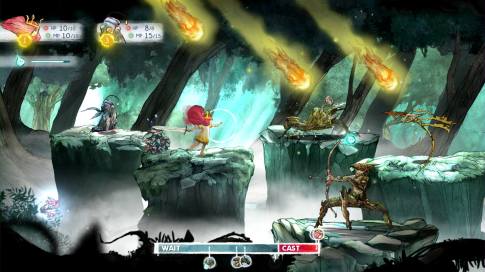 Which leads me to the combat itself.  As mentioned before, what you’ll find here is a play on turn-based combat with a very loose “random encounter” mechanic.  You’ll see monsters wandering on the map – approach them, and you’ll enter into battle.  The monster you see on the map is only one of the creatures that will be in that battle, but it’s enough of a clue that you can stop and make sure you’re kitted out properly before engaging.  Giant fire spider?  Time to make sure you’ve equipped the stone that gives all your attacks water damage.  Tree creature?  Better switch to fire!  It’s a rock paper scissors mechanic that’s easy to figure out, though sometimes there’s a bit of trial and error to figuring out what a creature’s weakness is, an aspect I rather enjoy for it’s puzzle element. As for the combat, it isn’t true turn-based, but more of an “active time battle” a la certain Final Fantasy games.  A bar on the bottom of the screen shows everyone’s progress towards being able to attack.  The trick here is that you can manually send your firefly buddy to stun an enemy creature, in the hopes that you can go first or that you can delay your opponent long enough so you can interrupt their attack.  Managing this bar is the trickiest part of the game and is what keeps me so engaged.  Some of your companions have spells that affect this bar – they can speed up a teammate, slow down an opponent, or make a teammate protected from being interrupted.  It’s a constant juggling act and I LOVE IT.

CHILD OF LIGHT is not a hard game.  Thus far, only in the early game have I had trouble with bosses that felt like it came from being under-leveled.  But it exists right on the edge where I have to carefully plot out each move to make sure that I DO survive.  The rest of the time, I’m flying and exploring, journeying about looking for the next whimsical town of dwarfs or human-sized mice, diving into a cave for a hidden chest.  It is utterly relaxing and I can’t say enough good things.  CHILD OF LIGHT is available on literally every gaming platform, so go seek it out!

2 thoughts on “Things I Love: CHILD OF LIGHT”