Another small but mighty haul this month! Again, I’ve been super selective about my ARCs so I can work on backlist.  HOWEVER, I expect the next few weeks to be a much different story as the Orbit Reviewer Newsletter went out and…well, I went a bit crazy! But that’s a tale for another month, once I have shiny copies in my hand.  For now, here are the lucky books that made the cut and joined my shelves!

THE CHASING GRAVES Trilogy by Ben Galley
I really would like to dabble more in self-published books, so I jumped on the opportunity to pick up a fantasy trilogy for a grand total of 99 cents.  I already had a copy of book one, but why not just have all three books ready to read?  In this world, a person who dies can be brought back to as a slave to the rich.  Caltro is one such unfortunate soul, and now he’s caught up in a whole mess of conspiracy. 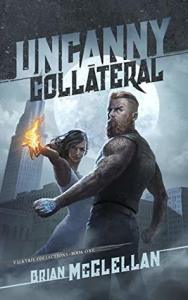 UNCANNY COLLATERAL by Brian McCellan
I honestly thought I had this one already, but thankfully I realized my mistake before the offer to pick up this novella for free ended!  I’ve been told that fans of THE DRESDEN FILES will find a lot to love here, so I’m excited to check this out. 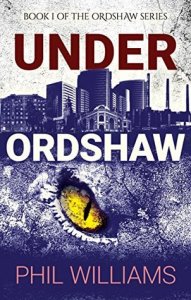 THE UNSPOKEN NAME by A.K. Larkwood
As mentioned, I’m trying to be much more judicious about my ARC requests this coming year so I can tackle my extensive backlist. However, the second I saw that I could download this one off of Edelweiss, I slammed the button to secure my copy!  This is the first book in a new fantasy trilogy that follows a woman who dodges her fate to be a sacrifice to a god by becoming a thief and assassin in the service of a mage.  I’ve been hearing good early buzz that says this is a lot of fun!

UNDER ORDSHAW by Phil Williams
I’ve accepted a review copy of this first book in a self-published urban fantasy series.  A woman who is a card sharp has her money stolen, and the hunt for the thief drives her into the depths of the supernatural streets, where she’ll discover a much bigger threat than she could have imagined. It’ll be a bit before I can review this one, but I’m definitely intrigued!

And that’s it for October!