It was a fairly quiet month for new hauls, a fact I’m embracing given my desire to turn my attention to my backlist pile.  Even so, I’ve gotten my hands on some books I’m very excited to read, so let’s dive in, shall we? 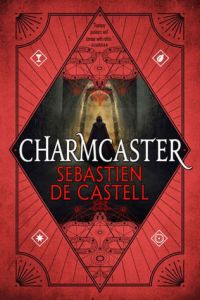 CHARMCASTER by Sebastien de Castell
I managed to stay fairly restrained this month and only made one new purchase.  CHARMCASTER is book three in the SPELLSLINGER series, and was acquired in pursuit of the Great Series Read Project.  I read and reviewed book two, SHADOWBLACK earlier this month, and in a bid to keep the momentum going, I’ve put this on my shelves with a goal to read it in April!

NIGHT OF THE DRAGON by Julie Kagawa
I’M SO EXCITED.  I’ve been anxiously monitoring the NetGalley site as the release date for the final installment of the trilogy drew near, and my prayers to the book gods were answered!  This Japanese-inspired YA fantasy is about Yumeko, a half-kitsune, half-human girl who is racing to stop the Master of Demons from using the Scroll of a Thousand Prayers to unleash his creations on humanity.  The scroll only works on a specific day once every thousand years, and with the day drawing closer, it will take all of Yumeko’s allies – including a recent foe, to stop this great evil.  I’ve very much enjoyed this anime-feeling adventure, and can’t wait to see how the conclusion plays out!

KINGDOM OF LIARS by Nick Martell
This is a debut fantasy that has piqued the interest of many in the SFF community, including myself!  Featuring a magic system where magic comes at the cost of memories, it features a young man named Michael hoping to exact revenge on a royal court he believes wrongly accused his father of treason.  But with a big gap in Michael’s memories, there’s little he can do to prove his father’s innocence – until the opportunity arises to rejoin the royal court and uncover what secrets are hidden in its halls.

DOCILE by K.M. Szpara
I’d been on the fence about this one for months, unsure if it would be my cup of tea or not, so the universe decided to nudge me towards the correct decision.  First Tor put up the first six chapters, enough to whet my appetite.  Then a fellow blogger had an extra copy which she graciously gave to me, and that sealed the deal.  Friends, I had this read in the space of about three days, and my review went up earlier this week!  It’s speculative fiction about power and debt and control and sex and is simultaneously a rough read and something I could not put down.  It is NOT a book for everyone, but if you’re the right fit, it is absolutely worth the read.

NETWORK EFFECT by Martha Wells
MURDERBOT!  Nothing else to say here other than to say THANK YOU to the other wonderful blogger who had an extra physical copy and put this into my hands!

THE ORDER OF THE PURE MOON REFLECTED IN WATER by Zen Cho
I had an eARC of this one, but happily upgraded to a physical copy because LOOK AT THAT COVER!  *swoons*

And that’s the haul for the month!  What books did you haul this month?

New ARC! I've been trying to read more sci-fi this year, so I'm checking out THE LAST WATCH by J.S. Dewes. A military ship full of the soldiers and crew no one else wanted on their ship is suddenly stuck saving the galaxy since they're the only one close enough to handle the problem in time. I'm a sucker for misfits and rejects coming out on top, so the premise definitely hooked me!
Today on the blog, I'm reviewing THE THIEF WHO SPAT IN LUCK'S GOOD EYE by Michael McClung, the second book starting thief Amra Thetys. Come along for a mad-dash adventures as Amra gets dragged into a millenia old feud between gods and sorcerer kings!
This week, I'm reading A DESOLATION CALLED PEACE by Arkady Martine, sequel to A MEMORY CALLES EMPIRE! A third of the way through and I'm pleased to report it is just as engrossing as the first book! Intergalactic politics, both within the Empire and without, have to be navigated while also dealing with a terrible alien threat that may consume the whole galaxy if someone can't find a way to communicate with it and dissuade it. And that someone might just be Ambassador Mahit Dzmare.
Hope your weekend is going well and you're getting some reading done! I finished WE LIE WITH DEATH and have moved on to OUT PAST THE STARS by K.B. Wagers, the final book in THE FARIAN WAR trilogy. Empress Hail Bristol is facing god-like creatures heading towards their corner of galaxy, and she's going to have to find a way to unite warring factions to stand against the coming enemy.
If you heard screaming this week, that was me discovering I'd received an ARC of FUGITIVE TELEMETRY by Martha Wells, the next novella in THE MURDERBOT DIARIES! In this installment, Murderbot has to solve a murder. Let's say that again, Murderbot. Is solving. A murder. Cannot wait!
I am ALWAYS here for more Becky Chambers, so I'm thrilled to have an eARC for her latest novella, A PSALM FOR THE WILD-BUILT! Hundreds of years after robots gained self-awareness and simply vanished into the wilderness, a tea monk's life is upended when a robot appears on their doorstep to honor a promise about checking-in. It's a strange premise but Becky Chambers always does a fantastic job about contemplating life through fantastical sci-fi worlds.