Note: I was provided a free ARC by the publisher in exchange for my fair and honest review. 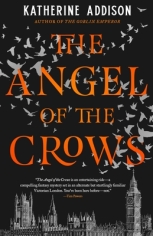 In Victorian London, every public building is watched over by an angel, a supernatural being that protects and assists the people inside its dominion.  When Dr. Doyle arrives in London after sustaining an injury in the Afghanistan War, he could never have predicted he would have ended up with an angel as a roommate. But Crow is not like the other angels. He doesn’t guard a single building.  Crow is the Angel of London, and as such, offers his services as a consulting detective to any being, supernatural or otherwise, with a mystery to solve.  But after a string of successful cases, Crow and Dr. Doyle find themselves with their toughest case yet.  Prostitutes are being brutally killed in the East End by an unknown assailant – one the newspapers will eventually call Jack the Ripper.

Have you ever wanted to read the original Sherlock Holmes adventures, but with supernatural creatures and elements mixed in?  If so, have I got a book for you!  THE ANGEL OF THE CROWS is a faithful (sometimes too faithful) retelling of many of the original short stories.  While the lead characters have been renamed, they still live at 221 Baker Street in the late nineteenth century, they frequently work with Inspector Lestrade, and yes, they will absolutely take a trip to the countryside to investigate the Hound of the Baskervilles.  But this is a world where the Hound might realistically have demonic origin, and if someone claims they’ve seen a ghost, that isn’t a notion to scoff at.  Werewolves and vampires openly walk in the streets, and a young woman can receive a respectable certification in clairvoyance.

As someone who has avidly consumed several iterations of Sherlock Holmes over the years, from the original short stories to the Jeremy Brett TV series to ELEMENTARY, I had mixed feelings about this latest outing with the famed detective. On the one hand, these are well-written adventures written much in the style of Sir Arthur Conan Doyle’s original tales, and are certainly a cozy way to pass the time.  On the other hand, I found myself most enjoying the book when it offered a new angle or element to the material, and that was something it didn’t do enough.

THE ANGEL OF THE CROWS has one broad mystery – that of tracking Jack the Ripper – but the majority of the plot follows Crow and Doyle over a series of several mysteries of varying length. Some take place over several chapters, while a few are only a chapter or two long and serve as an interstitial that allows a deeper dive into Crow and Doyle as characters and serve up some secrets about Doyle’s background in particular. Sherlock enthusiasts will recognize several cases, from THE SIGN OF THE FOUR to THE SPECKLED BAND, many of which have been given a supernatural twist.  The more I saw of this London with its angels and hellhounds and vampires, the more I craved to see, to the point where I found myself wishing that the author had created original adventures for Crow and Doyle set in this world, rather than being largely guided by the source material.

That, at the end of the day, is what defined my takeaway from THE ANGEL OF THE CROWS: the desire for more. I had a perfectly lovely time with Crow and Doyle, but I wanted to know more about them, especially Doyle, who has a surprising backstory that merited more exploration than what we are given.  A little more explanation about some of the author’s original elements, like the angels, or the difference between a vampire and a hemophage, would have also shored up the book.  Nevertheless, THE ANGEL OF THE CROWS is a book I enjoyed, and can certainly be recommended to those looking for a comfort read with a splash of new elements.

11 thoughts on “Review: THE ANGEL OF THE CROWS by Katherine Addison”