Like many people, I’ve had more time on my hands ever since the pandemic hit.  While this has meant more reading time, it’s also meant more time to explore my backlog of video games – to the point where I’ve actually started and beaten a surprising number of games. Some of these have been big AAA games, and I’ve written about my experiences with CONTROL and SKYRIM.

This week, though, I’m primarily focusing on smaller games that have been keeping me entertained.  So yes, I’m STILL working on FINAL FANTASY VII REMAKE (so close to finishing it guys) but here are some other video games I think you should know about.

MOONLIGHTER
What if you were an adventurer AND a shopkeeper?  That’s the premise of MOONLIGHTER, a game where you dive into a dungeon, grab as much loot as you can without dying before hitting a magical escape button, then come back to town to sell off what you found.  The early game in particular is a delicate balance, as some of the items you can find in the dungeon are materials you can use to build better equipment so you can get further in the dungeon – but you’ll also need money to craft the equipment, so do you sell the material now and hope to find more later? And which items are junk worth only a few gold, and which are relics worth hundreds, if not thousands of gold?  The loop of loot-sell-upgrade-loot-sell-upgrade kept me hooked for hours, though there was definitely a point where I was so overpowered the final few dungeons didn’t pose a real challenge. But that early game, especially with limited backpack space, made me really think about what I was choosing to take with me and what was being left on the dungeon floor.

REMNANT: FROM THE ASHES
A slightly bigger title than others on this list, REMNANT made a bit of a splash as the “Dark Souls with guns” game. That, and the procedurally generated maps meant that the bosses that were in your games were randomized, encouraging replay so you could see all the various monsters on hand.  The lore is a bit nonsense, and the UI SUCKS, but it’s the perfect game for when you just need to shoot a bunch of monsters.  I also appreciated the traits system, where perks unlocked based on which bosses you’ve beaten and other actions you’ve taken in the game, allowing you to focus on certain playstyles.  Me?  I invested heavily in Quick Hands, so my reload and weapon swapping times were lightning fast.  I’ve beaten the main campaign, but a story-based DLC releases in August 2020, and I will happily throw ten bucks at the developers for new monsters to shoot at.

INDIVISIBLE
I’m in the middle of playing this RPG, which is an interesting blend of Metroid-style platforming and fighting-game combat mechanics.  I’d been curious about INDIVISIBLE after hearing about it on a gaming podcast, so when it came to Xbox Game Pass, I happily downloaded it to check out.  Thus far, it’s fun and engaging story with some great characters.  You play as Arja a young teen on a revenge quest who also keeps accidentally sucking people into her head, only for them to pop out to help her in combat?  It’s a fun and silly premise that the writers have made work to explain the large party you eventually come to travel with (and I mean large – I believe there are roughly 30 recruitable characters for your team).  I’m still getting the hang of how combat works – fighting game button mashing of X + Up Arrow is not something I’m great at, especially when it comes to making combos happen on purpose, and every character has their own move set.  I wish it tutorialized a little better how to take advantage of a character’s abilities, but I’m slowly getting there through experimentation! 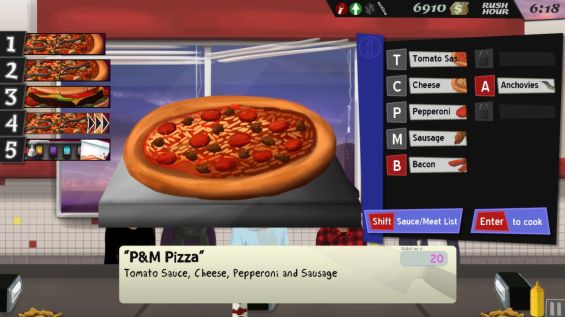 COOK, SERVE, DELICIOUS!
Hello, meet a game that absolutely consumed my gaming life for a few weeks.  It began as a complete impulse buy during the Steam Summer Sale – I’d been curious about the series for months, I was bored out of my skull, and it was $2.50, how could I say no? I’ve pitched this to my friend as “Overcooked, the Typing Game.” You manage a restaurant by hitting specific keyboard prompts in specific orders in order to chop, broil, cook, and eventually serve various dishes.  On top of that, you have to hit keys to clear out chores like dishes and taking out the trash. This game walks a line between zen meditation and absolute panic, especially during lunch and dinner rushes.  Orders are coming in, that hamburger is done cooking and needs to be assembled, and you need to throw on a very complicated soup dish to simmer.  Sometimes you hit a perfect flow state and handle everything flawlessly, if also dancing on the knife’s edge of burning several meals.  And sometimes everything is on fire, you accidentally put anchovies on the pizza instead of sausage, and that one customer left because you took too long to serve him coffee.  I’ve almost completed the final stage of COOK, SERVE, DELICIOUS!, but with two other games in the series, I suspect I’ll be spending many, many more hours slaving over a virtual hot stove.

And that’s what I’ve been playing these last few months.  What games are keeping you entertained?