It’s been a while since I put together a Top Five Tuesday list, but with people starting to get into Halloween Spooky Mood, I thought it would be fun to throw together some books for the season. I’m not a huge horror reader, so these books aren’t necessarily “scary,” but they have some creepy monsters or situations that might be good if you’re looking to get into the holiday mood. 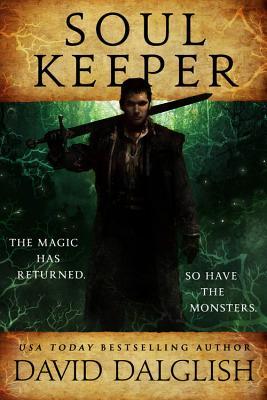 SOUL KEEPER by David Dalglish
This fantasy book is all about a great darkness rising over the land, as monsters of myth suddenly begin roaming the earth once more. The book starts with the discovery of zombie-like creatures and quickly escalates to a magic serial killer who views his victims as literal art pieces. an unsettling situation that our heroes must try and stop, while also understanding why monsters are attacking the city at night.

WILD COUNTRY by Anne Bishop
A standalone spin-off book from Bishop’s THE OTHERS series, this book remembers that the world Bishop created is pretty dangerous for most humans. “Wild country” is used to describe a region where there are almost no human settlements, where they are even more at the mercy of the ruling supernatural creatures than in a normal city. Now, let’s be clear, the supernatural creatures of The Others are fairly reasonable – until they are crossed. When some humans start making a play for control of the town of Bennett, tensions in the town begin to escalate, and it’s up to the new human deputy sheriff to try and solve matters before they turn deadly.

ASHES OF THE SUN by Django Wexler
For a book with a fairly bright, cheerful cover, ASHES OF THE SUN has some pretty dark gruesome creatures in it. The main threat in the world are creatures that kill humans or animals, eat them, and then attach random body parts onto their center mass. The result is that this book is full of scuttling monstrosities with multiple heads, way too many appendages, and other nightmarish descriptions. While the main thrust of the book is between a rebel faction and the Twilight Order, these creatures definitely make their presence felt.

GIDEON THE NINTH by Tamsyn Muir
I will be frank, I didn’t love the first half of this book, a story about necromancers who come together for a chance to earn a place at the Emperor’s side as one of his Lyctor’s. Once the story gets settled at Canaan House, though, it sinks into gothic mystery vibes which I really enjoyed. There’s no way off the planet until the contest is over, and someone has begun murdering the contestants. Gideon and Harrow explore the labyrinth of Canaan House, trying to solve the puzzle that will reveal how one becomes a Lyctor, while also trying to figure out who the murderer is.

FOREST OF A THOUSAND LANTERNS by Julie C. Dao
A Chinese-inspired retelling of Snow White, except from the Evil Queen’s perspective. Xifeng is a simple peasant girl who will stop at nothing in order to join the Emperor’s court, and one day become his ruling wife. That means she fully embraces the dark presence haunting the palace, one that promises power if she follows its teachings – and human hearts can be very empowering.

5 thoughts on “Top Five Tuesday: SFF Books with a Splash of Spooky”