Welcome back to If/Then, where I take two pieces of media and tell you why if you like one, then you’ll probably like the other. This week, we’ve got the RPG video game DIVINITY: ORIGINAL SIN 2 and the book SOULKEEPER by David Dalglish (and the rest of the trilogy). Choosing a fantasy book to pair with DIVINITY was a challenge, as there were several books that could have worked, but I think THE KEEPERS series by Dalglish in particular shares some great elements with DIVINITY.

As always, I will keep this post as spoiler-free as possible! 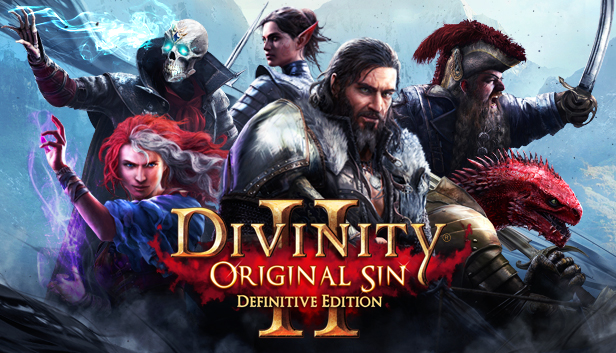 Note: You do not have to play any of the previous games to enjoy this one! While there’s callbacks to the first DIVINITY: ORIGINAL SIN, this takes place 1000 years after the first game and is largely a standalone story.

Welcome to Rivellon, a magical world full of humans, dwarves, elves, and lizard people. You’ll play as a Godwoken, a person with the ability to channel the magic known as Source, who also possess the capacity to become the next Divinity, champion of the gods. Unfortunately for you, people who are able to use Source are seen as dangerous and liable to attract the demonic Voidwoken, so they’re generally rounded up and shipped to Fort Joy, where specially designed collars suppress their ability to use Source. It’s up to you and some newfound Godwoken allies to find a way to escape Fort Joy and travel to the hidden location where you can ascend to Divinity. But be warned – only one person can claim the Divine Throne.

After a massive dragon mysteriously awakens, the people of the city of Londheim find that magic, thought little more than a myth, has returned to the world. Prayers to the goddesses suddenly have weight, and magical creatures have awoken after centuries of slumber. Thrust into this chaotic new time is traveling warrior-priest Devin Eveson. Devin hopes to find a way for humanity and the ancient races to live in peace, but his efforts might be shattered when a dark force begins murdering priests of the Three Sisters.

A Balance of Light and Dark

Both DIVINITY and SOULKEEPER balance lightness and darkness in their storytelling. SOULKEEPER’S Devin truly has faith in humanity and just wants to protect everyone. Throughout the series, he remains a champion for goodness and peace, and his network of human and magical allies is a warm spot in a dark time. And it is a dark time. There are some horrifically brutal murders that take place in this series (as well as some descriptions of past sexual assault, so enter the series forewarned.) But for every murder, there’s a cheerful fire spirit or feisty pixie who joins our heroes to fight back the darkness, so it truly is a balance.

DIVINITY, meanwhile has its own darkness belied by the cheerfully bright color palette of the game’s design. While there’s certainly humor to be found in the NPCs and the quests (not to mention your own antics, especially if you play the game in co-op), there are also some dark storylines. After all, this game starts with the state religion rounding up and imprisoning anyone who possess magic. There’s demons, there’s human experiments, there’s people who are magically enslaved. And yet DIVINITY can’t seem to shake a certain tongue-in-cheek attitude towards the absurdity of the whole situation. Sure that whole village over there was slaughtered by giant demon bugs, but have you talked to the squirrels to get their viewpoint on the situation?

An Adventure in a (Mostly) Contained Space

If you’ve played DIVINITY, you might fight me a bit on this one, but hear me out. Each of Divinity’s four acts is largely anchored by a central location, such as Fort Joy or the city of Arx. While the maps can still be sprawling and can contain a healthy chunk of land surrounding a city, it is still a more focused kind of exploration than, say, SKYRIM, where you wander all over one giant, connected map. Players of Skyrim can walk to multiple cities without ever seeing a load screen, while players of Divinity will quickly see the boundaries of their area. But Larian Studio still manages to jam tons of content into these contained spaces; my playthrough of the game took well over 100 hours. But keeping these settings contained forces you to contend with the factions and politics of each location. Will you turn over murder evidence to the religious Magister force, or sell it to the local criminal gang?

Meanwhile, SOULKEEPER takes place almost entirely in the city of Londheim, with occasional forays into surrounding areas. The city is a pressure cooker and Devin and his allies are trying to keep it from completely boiling over. The city also turns out to have some surprising secrets, as areas long forgotten or sealed off are rediscovered in the aftermath of magic reawakening.

Magical Races (Beyond the Norm)

Sure, you can play as an elf or a dwarf or even a regular old human in DIVINITY, but you can ALSO be a lizard person (very imaginatively called…lizards) or an undead Eternal. The additional races keep a familiar genre fresh, letting you create a character just a little bit different than what you’re used to, while still keeping some classic touchstones. Likewise, SOULKEEPER leans in hard to the idea of strange magical races, with the human-sized rabbit-like lapinkin or the deer-like dyrandar. These creatures are magical, powerful, and in the belief that the humans stole their home while they were trapped in an enchanted sleep, leading to some very tense conflicts.

A Search For Godhood

Lastly, both DIVINITY and SOULKEEPER share storylines about acquiring the power of the gods (though in SOULKEEPER’S case, this becomes more relevant in later books). In Divinity, you’re on a literal race to find a secret location where you can perform the Ascension ritual and become Divine. Along the way, you’ll discover a particular god is championing you in this race, but also that the gods themselves have some secrets. Over in SOULKEEPER, Devin’s sister Adria discovers that the prayer chants she learned as a priestess now have an actual effect on the world, that she can actually channel the power of the goddesses themselves. Over the series, she learns more about the goddesses and her own abilities, but at a certain point, if you wield the power of the gods…what’s to stop you from just acting like a god yourself?

And that’s a wrap! Hope you enjoy checking out SOULKEEPER or DIVINITY: ORIGINAL SIN 2 if you haven’t had a chance to yet!

One thought on “If/Then: DIVINITY: ORIGINAL SIN 2 and SOULKEEPER”