For this week’s Top Five Tuesday, Bionic Book Worm has thrown us the wide topic of summer reads!  I’m choosing to interpret this as books that are warm, fluffy, full of adventure and thrills and rides!  This post is more lightly inspired by Wyrd and Wonder, as I’m including some “fantasy adjacent” titles that I think will go over well with fans of the genre. 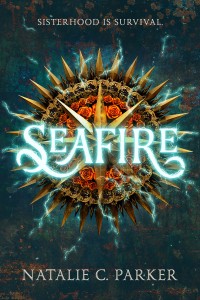 SEAFIRE by Natalie C. Parker
What better way to celebrate the summer than to join a group of women pirates as they sail about the ocean in their sun-powered ship?  On top of the setting, it just feels like a summer blockbuster of a book, with action-sequences and chases and explosions.  You won’t find magic here, but you will find a vaguely post-apocalyptic setting with future tech and a crew of sisters by circumstance who are doing their damndest to survive.  And it’s the start of a trilogy that’s ending this fall, so if you enjoyed it, there’s more where that came from!

A GATHERING OF SHADOWS by Victoria Schwab
Apparently pirates make me think of summer, because I was immediately drawn to select this title for my list purely because of the antics of Lila Bard!  The second book in the SHADES OF MAGIC series sees Lila Bard at sea with a pirate crew – because Lila decided she wanted to be a pirate and made it happen.  This book also sees the arrival of the Element Games, a kind of “magical Olympics” that Lila has no business entering because she has no magic.  Except, much to everyone’s surprise, she does. Honestly, I’m just here for Lila continuously telling the universe to shove it when it tries to tell her no.

THE KINGDOM by Jess Rothenberg
Another “fantasy adjacent” entry on the list!  In the not-so-distant future, a theme park has created genetically engineered cyborgs to work as “fantasists” – perfectly sculpted princesses who wander the park, putting on shows, greeting guests, etc.   Ana is one such fantasist, content to live her life and never question a thing, until the day when one of her “sisters” tries to kill a park guest.  Ana finds herself spurred to investigate what could have possibly caused her to act out of character, and soon discovers that happily ever after has a darker side.  This is by no means a “deep” exploration of AI and humanity, but I happily devoured it in 24-hours and enjoyed envisioning this vacation destination, even if it was hiding a dark underbelly. 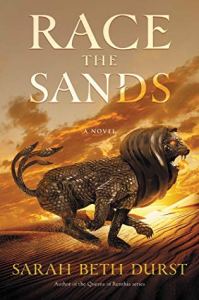 RACE THE SANDS by Sarah Beth Durst
What says summer more than monster-racing in the desert? RACE THE SANDS is an excellent 2020 fantasy release about two women competing in a deadly sport in the hopes of winning a better future.  Oh, and their lives are also complicated when the drama at the emperor’s court spills into the annual races, and political unrest threatens to leave the country open to invasion.  If you’re looking for a book set in a warm clime, with plenty of adventure, look no further!

WARCROSS by Marie Lu
Summer for many means vacation and leisure time, and that means VIDEO GAMES (you know, when you’re not reading).  So why not combine the two with a book ABOUT a video game?  Emily Chen is a bounty hunter by day, but also a pretty skilled player at WARCROSS, the competitive video game that the entire world follows with eager fascination.   When she is caught hacking her way into a championship match while in pursuit of a bounty, she’s surprised to find herself being offered a job by the game’s creator. Someone has nefarious plans for the championship games, and he wants Emily to go undercover to find out who.

And those are my summer-inspired recs!  What books do you like to read under the sun?

It's one of my favorite times of year - #wyrdandwonder! A celebration of all things fantasy! This is my physical (overly ambitious) TBR for the month. I've also got MASTER ARTIFICER and THE HOUSE OF ALWAYS on my Kindle. What are you excited to read this month?
Going into the weekend with dragon energy! I've got my hands on THE DRAGON OF JIN-SAYENG, the final book in K.S. Villoso's fantasy trilogy! I still need to read the second book, but I'm looking forward to completing the trilogy this year! This is the tale of a queen trying to navigate political upheaval and her own marriage, protecting her throne from threats within and without. The final book releases May 2021!
Received some lovely bookmail in the form of the final book in THE KEEPERS trilogy! This has been a dark tale of a city struggling to survive when both magic and magical creatures return to the world after centuries of being nothing more than myth. A blend of grimdark and hope, packed full of interesting creatures! VOIDBREAKER released earlier this year and I can't wait to finish the series!
It might be spring, but that doesn't mean you can't enjoy a cozy story set in the woods! FOR THE WOLF follows a second daughter who is sacrificed to the mysterious Wolf in the Woods by her people in the hopes it will restore their gods to them. But the daughter has a secret power which could change everything. I love a good fantasy romance, looking forward to reading! Releasing June 2021.
Happy Easter! Hope you're enjoying celebrating or having a lazy Sunday! As for me, I'm staring lovingly at my newest eARC, SIX CRIMSON CRANES by Elizabeth Lim! I loved Lim's dulogy that began with SPIN THE DAWN, so really looking forward to her new book in the same world! When a Princess Shiori's forbidden magic is discovered by her stepmother, her stepmother uses her own powers to turn Shiori's brothers into cranes. Shirori is cursed: every word she speaks from now on will kill one of her brothers. Shirori must find a way to break the curse, all without uttering a word.
In a shocking development, I have made it to the last book on my monthly TBR! This week, I'm reading RAVENCALLER by David Dalglish, sequel to SOULKEEPER. Now that magic has returned to the world, the city of Londheim has to contend with magical peoples who have awakened - and who want their ancient lands back. While two sides attempt to negotiate peace, Adria contends with the miraculous power over souls she's been given, and works to understand how it connects with an ancient culture known as Ravencallers. The full trilogy is currently out now!