Note: I was provided a free copy of the book by the author in return for my fair and honest review. 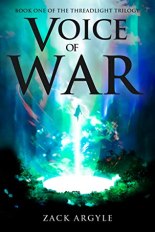 Bloodthieves are stalking the streets of Alchea.  This gang of kidnappers is stealing Sapphires and Emeralds (magic users who can manipulate the threads that tie all things together to push and pull objects), and draining them of their blood to create a drug for non-magical people.  High General Chrys Valerian has been tasked with shutting the Bloodthieves down, but his involvement becomes more complicated when he receives a warning from a stranger that the group is a threat to his soon-to-be-born child.  The more Chrys learns about the Bloodthieves, the more he realizes they are far more influential and dangerous than simple kidnappers. And with his wife due any day, Chrys has only a small window to act to keep his child safe.

VOICE OF WAR is the kind of novel that immediately sucks you in with it’s intriguing world building.  Thrown into the middle of a religious ceremony and then immediately confronted with a prophecy, I sped through the early half of the book, eager to learn more about threadweavers and Bloodthieves and everything in between.  While the magic system has some unavoidable comparisons to another famous fantasy series, the author manages to make it his own, and I enjoyed watching how the thread manipulations were used in combat.  I also liked seeing how a city outside of Alchea had built special structures for threadweavers to use their abilities on to more easily traverse the city.  New discoveries add additional wrinkles to the magic system, and watching characters adapt to those discoveries were some of the best parts of the book.

The characters of VOICE OF WAR were a little more of a mixed bag.  Chrys and Laurel were among the best written.  Laurel is a bit of a petulant teenager who you occasionally want to scream at, but she also felt realistic, so I didn’t particularly hold it against her.  Chrys is solidly done, a leader and father trying to balance family with a threat to the city while also navigating city politics.  The side characters I could mostly take or leave, though I occasionally felt like I was being told about their characteristics more than I was actually seeing them in action.

Which leads me to what, for me, was the weak point of VOICE OF WAR: the structure and the pacing.  As mentioned above, I fairly flew through the first half of the book, which is largely told from Chrys and Laurel’s POVs.  The book is arranged so that you spend several chapters at a time with one character before you swap to another, making it feel less like interwoven stories and more like separate sections placed next to each other.  At the halfway marker, however, a third POV character, Alverax, is introduced, and his plot takes place far away from the action of the main story.  Although Alverax’s story does eventually cross paths with Chrys and Laurel’s, it was incredibly jarring to spend a large chunk of the back half of the book with a completely new character in a completely new location, leaving Chrys and Laurel behind for chapters at a time.  Alverax didn’t quite click with me as a character, and his development going into the finale felt a bit rushed.

(I’d also like to give a warning that there is a graphic torture scene late in the book which tonally felt out of place with the rest of the story.)

Overall, I enjoyed my time with VOICE OF WAR.  It was a well thought out magic system and an engaging set-up.  Although I struggled with some of the pacing, it’s a solid first outing worth checking out!

4 thoughts on “Review: VOICE OF WAR by Zack Argyle”