Note: I was provided a free review copy by the publisher in return for my fair and honest review. 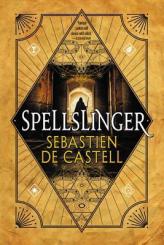 Among the Jan’Tep people, magic is all.  Your strength of magic, and your ability to wield it to defend your family, is your worth.  That’s a problem for Kellen, who at 15-years-old is just about to take his mage trials.  Problem is, he doesn’t have much magic to his name, despite coming from one of the strongest magical families in town.  And if Kellen doesn’t pass the trials, he’ll be stripped of his status and demoted to the ranks of the non-magical servants. As if Kellen doesn’t have enough problems, a strange woman named Ferius Parfax has arrived in town, right as the magics of other mages in town, including Kellen’s younger sister, begin failing.  When Kellen stops a mob that believes Ferius is responsible for the sickness, it puts him squarely on the outs with people he grew up with all his life.  But Ferius has opened his eyes to the possibility that magic might not be the only way to think about life – and that might be the key to outwitting whoever is truly responsible for the failing magic.

Wow, where to even start with SPELLSLINGER?  I was not prepared for how much I was going to fall in love with this book.  It starts with some fairly standard fantasy tropes: the underdog kid who can’t do magic, the bullies who pick on him, the mysterious new person in town who seems to have their eye on the underdog.  The tale quickly stops itself from feeling stale, with new twists on magic, delightful banter, and a conspiracy with multiple layers.  This was also a story with real stakes and danger, where sometimes irreversible actions were taken that forever mark the hero and those around him.

I loved the magic in this world, which starts with six “standard” kinds of magic.  Most Jan’Tep can access at least a few of these domains and the most powerful can access all of them. This magic must be accessed by careful concentration, specific words, and precise hand gestures.  It’s a very deliberate magic and was fascinating to see in play.  But even more impressive were the various powers that revolved around decks of playing cards.  Sometimes that power felt like “true” magic, other times the power was in the symbol of the card, other times those cards were deadly weapons.  Let’s just say if you’ve ever wanted to spec out X-Men Gambit as a D&D character, do I have a book for you!

As fantastic as all the above is, a book isn’t worth much to me without good characters to hold it together, and thankfully SPELLSLINGER has a great lead duo in Kellen and Ferius.  Kellen has a reputation for being “clever,” something that is seen more as a trouble-making flaw than an asset, but it’s a skill he has to use continuously to survive in a world where most everyone he meets can paralyze him or set him on fire with a thought.  Kellen runs the risk of being a standard chip-on-his-shoulder teenager, but this is his coming-of-age story and about him realizing that he has nothing to prove to a town that would turn him into a servant merely because he has no magic.

But by far the stand out was Ferius Parfax.  Ferius belongs to an order called Argosi that travels the world in part to witness events that are going to have significant consequences.  Besides her dry sense of humor, Ferius is one of those characters that force other characters to look outside their own blinders.  She’s the Rafiki hitting Kellen’s Simba over the head, showing him that magic isn’t the be-all-end-all that he’s been raised to believe.  Ferius shows Kellen there are kinds of power in this world, and that sometimes a simple sentence can have unforeseen ramifications.

I haven’t even gotten to squirrel cats and the twists and the fantastic ending that makes you eager for the next chapter.  This is simply a great ride of a story, one that I devoured in a few days, and then immediately went to order the sequel. It’s fun, it has consequences, it moves at a great pace.  In short, if you’re looking for a new fantasy series to start, SPELLSLINGER indicates great things are on the way!